Industry 4.0 will make Belgium an attractive destination for engineers

The smart factories of Industry 4.0 are set to spark a revolution in the manufacturing industry, and Belgian companies are set to take full advantages of their prime location and access to international markets, alongside the well-educated, multi-lingual workforce.

The benefits of smart factories are almost impossible to overestimate – not only will they speed up production process and reduce costs, they also allow for the production of personalised items for individual consumers.

It is no surprise that Belgian manufacturers are highly interested in this new technology. A recent study by Price Waterhouse Coopers Belgium (PwC) showed that 83% are actively looking at how to implement the Industry 4.0 concept in their business and operational strategy.

To lay the groundwork for these ´smart factories´ manufacturers are investing heavily in new software used to monitor and operate production processes. “The requirements of manufacturing execution systems (MES) will be completely different for a smart factory”, explains Vincenzo Carrabs, Engineering & Manufacturing division manager for Michael Page Brussels. “Smart factories are going to be equipped with self-learning machines and robotics, all of which requires different ways of working.”

There is high demand for candidates who know how to implement MES software. “We get a lot of request from our clients to find MES specialists. Only recently, we placed a global MES Project Director”, says Vincenzo Carrabs. “These positions require a lot more than just technical skills. A big part of the job is change management. So social skills and people management skills are essential, in order to get everybody on the same page.”

Frontrunner of the revolution

The frontrunners of the 4th industrial revolution can be found in Germany, where internationals like Siemens, Bosch and Volkswagen lead the pack. It’s no coincidence that Industry 4.0 was one of the most important topics at the Hanover Messe, the yearly gathering of the German manufacturing industry. According to a recent study by PwC, companies worldwide will invest more than EUR 860 billion on Internet of Things (IoT) in the coming two years.

The adoption of IoT makes Germany, whose economy is primarily driven by the manufacturing sector, a global hotspot for engineers. According to a recent survey by PageGroup, conducted among more 1,900 engineers worldwide, the country is proving the most popular destination for candidates looking to further career abroad. Of all the engineers who were willing to relocate, 48% see Germany as the destination that will provide the best environment for opportunities. Since many German companies are involved in advanced and applied research, it is one of the most important global hubs for R&D for the engineering and technology sectors.

On a global level countries in the Latin America are surprising popular among engineering expats. Almost 25% of engineers, for example, are willing to relocate would consider moving to Argentina, which is planning on investing in huge infrastructure projects in the upcoming years. The government recently signed a letter of intent to cooperate closely with big international firms, like Siemens, to develop solutions in the fields of energy, transport and intelligent cities, which would lead to thousands of new jobs.

One of the focuses of the investments of the Argentinian government will be renewable energy, which is part of a general trend in Latin American countries and in other emerging markets.

According to a recent report by the United Nations, the developing markets are now outspending industrialised nations on renewable energy. They have spent EUR 145 billion to date on renewable projects using sources like wind and solar, whereas developed nations only spent EUR 120 billion. South American countries like Chile, Brazil and Mexico are in the top 10 of highest spenders in the world, which goes some way to explaining why so many Latin American countries are in the top 25 of most popular destinations for engineers.

For Trend Watch PageGroup surveyed 18352 job seekers worldwide, who applied on our Michael Page and Page Personnel websites during the 3rd quarter of 2017. Of the 1935 engineering professionals who participated in the study, 73% were willing to relocate, for job opportunities, a better salary or a different lifestyle. 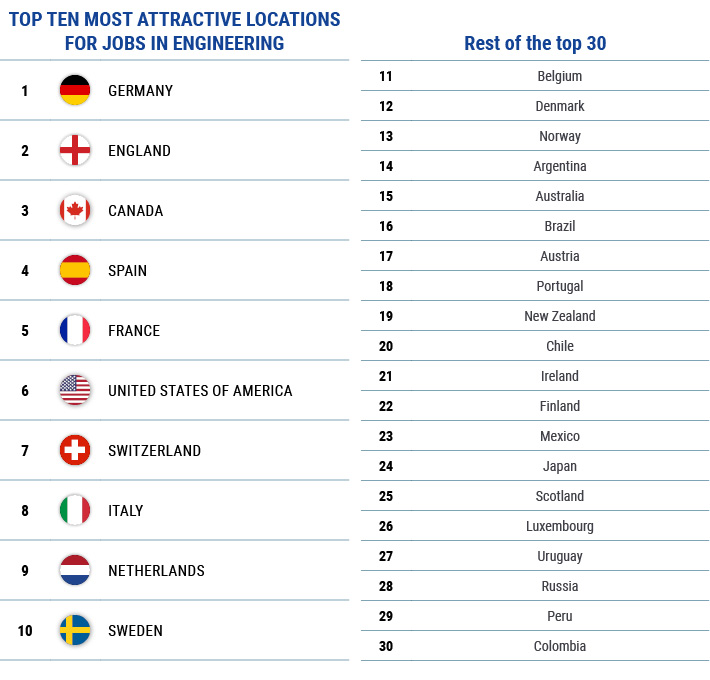 Brussels attractive for international sales talent
Thanks to the exceptionally skilled and multilingual workforce, Brussels is an attractive location for international…
4 min read
Luxembourg an attractive location for online marketing specialists
Hosting companies like Amazon, Apple and eBay, Luxembourg is a major European player in e-commerce. This growing…
3 min read
Belgium leading the way in digitalising the workplace
The HR industry is the middle of a digital revolution, and Belgium leads the way in Europe when it comes to…
5 min read
Luxembourg upcoming hotspot for candidates in fintech
The combination of a swiftly developing IT sector and a strong financial industry makes Luxembourg an upcoming hotspot…
3 min read